As of January 2021, the Garland is the most impressive and best-preserved wreck in the Falklands. Formerly a three-masted, 599-ton, steel barque, built in Liverpool, England, in 1865, she currently lies on the eastern shore of Darwin Harbour across the water from Goose Green. She came to rest there in 1922, after breaking her moorings.

Garland arrived in Port Stanley on 6th March 1900, under the command of Captain H Meyer, with a crew of 16 men. It put in for repairs, having run into trouble during a routine passage from Hamburg in Germany to Talcahuano in Chile. Broken jars of acid in its hold spilled acid onto the rest of the cargo, causing extensive damage to her bottom plates. Inspection by Stanley authorities said she was beyond economic repair and she was condemned.

Best Preserved Wreck in the Falklands

In 1910, she was towed by the tug Samson to Goose Green. At first, she was used in connection with a sheep-meat canning plant owned by the Falkland Islands Company.  In 1912, she became a coal store, before being declared “useless” in 1919. The canning plant closed in 1921 and a year later Garland drifted in and out of the narrows, before settling in her present position.

She lay largely ignored, until, in October 1966, a team of divers discovered her figurehead covered in a layer of silt on floor of the cove. It featured a young woman dressed in white, holding a garland of golden flowers. The head was missing and could not be found. 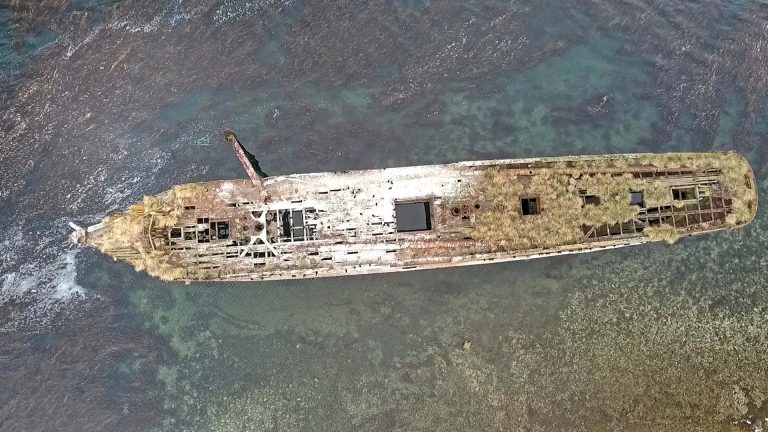 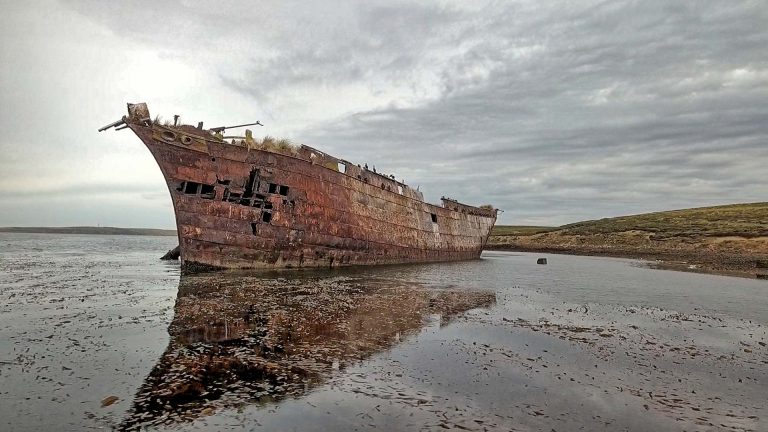 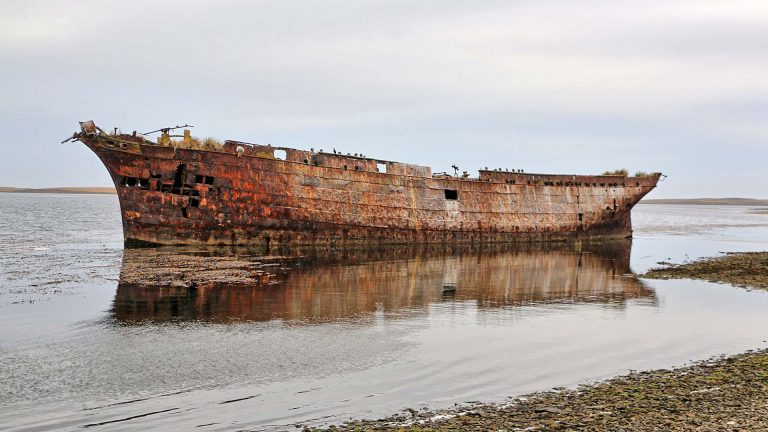 Originally, ships’ figureheads, which date from the earliest days of seafaring, were religious symbols made to protect the vessel and reflecting the sailors’ belief that sailing ships were living things, which needed to find their own way across the oceans. They could only do this if the figureheads had eyes.

Despite the absence of the head, the Garland’s figurehead was taken to Stanley, where it was restored by the then Falkland Islands Museum Curator, John Smith. Today, it’s displayed in Stanley’s Dockyard Museum.

Garland has robustly managed to survive the many winter storms and resist the pernicious sea worms, the teredo and the gribble, and remains well preserved, although eventually time and tide will take their toll, unless something is done to further protect her.

Use our interactive map to find heritage shipwrecks