On this day in history – 5th April 1982: ‘Royal Navy Task Force heads for the Falklands’ 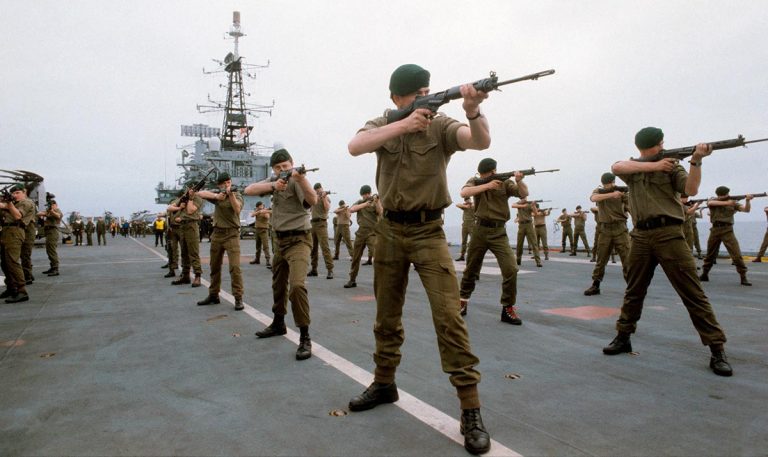 Just three days after Argentine forces invaded the Falkland Islands, the aircraft carrier, HMS Hermes, flagship of the Falklands War naval task force, left Portsmouth Naval Base, under the command of Captain Lyn Middleton and headed for the South Atlantic.  On board were 12 Sea Harrier attack aircraft and 18 Sea King helicopters. With her was Britain’s only other carrier, HMS Invincible.  It was the start of an 8,000 mile voyage that would eventually involve a total of 127 British ships, 9,000 military personnel, 5,000 tons of military equipment and 70 aircraft.  43 of the ships were Royal Navy, 22 were Royal Fleet Auxiliary and 62 were merchant ships.

Hermes, named after the winged messenger of Greek Gods and dubbed ‘The Grand Old Lady’ by Royal Navy sailors, was the larger of the two carriers and being made the fleet’s flagship carried some irony – as she was due to be decommissioned in 1982, following a British Government Defence Review. The Argentine invasion saved her from the scrapheap and saw her at the forefront of the campaign to recapture the islands for Britain.

HMS Hermes reached Ascension Island, the rendezvous point for the task force, after 11 days at sea.  When the fighting started, the Old Lady was kept at a safe range, because she was considered “too valuable” to risk being offshore.  Her Harrier airgroup was used extensively to keep Argentine fighters and bombers at bay and her Sea Kings were fully engaged in ferrying troops to and from the battlefields, when the amphibious landings to retake the islands began on 21st May, 1982. 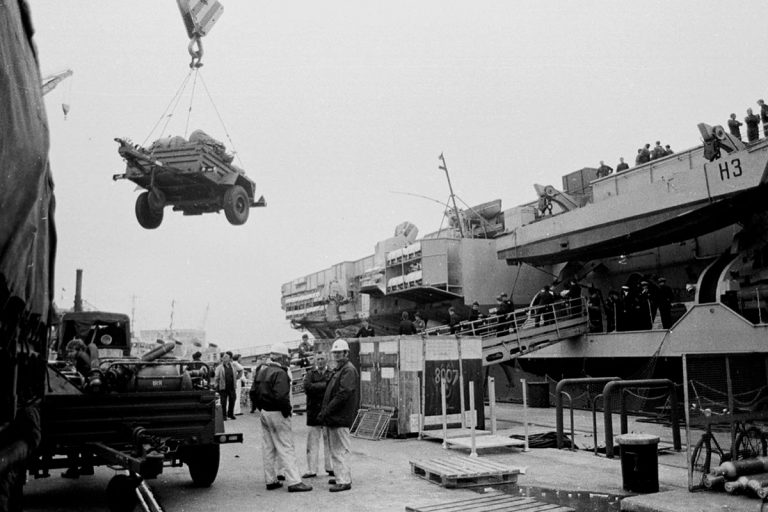 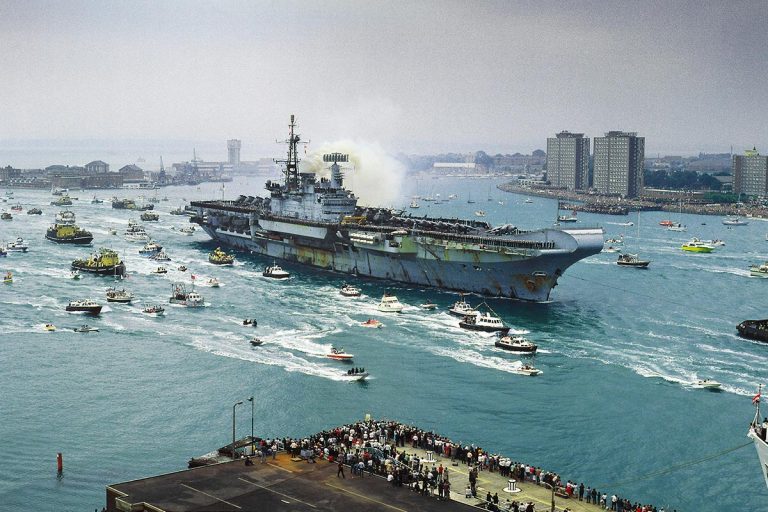 HMS Hermes returning to Portsmouth in 1982 to a hero's welcome

After the war ended, on 14th June, 1982, Hermes returned to Portsmouth, where she received a hero’s welcome on 21st July. Thousands crowded the dockside to see the 1,700 on board disembark 108 days after she had left for her historic mission.

In 1986, HMS Hermes was sold to India and renamed INS Viraat, which in English generally means “huge” or “massive”.  She remained in active service with the Indian navy until 2017, when she was officially decommissioned – 36 years after she was due to be scrapped.  By this time, she was the world’s longest-serving aircraft carrier and had sailed more than 700,000 miles – equal, roughly, to 28 times around the globe.

In August 2020, it was reported that, having sat idle in Mumbai for three years, she had been sold for £5.1million to Asia’s largest ship scrapyard and would be “turned into motorcycles”. 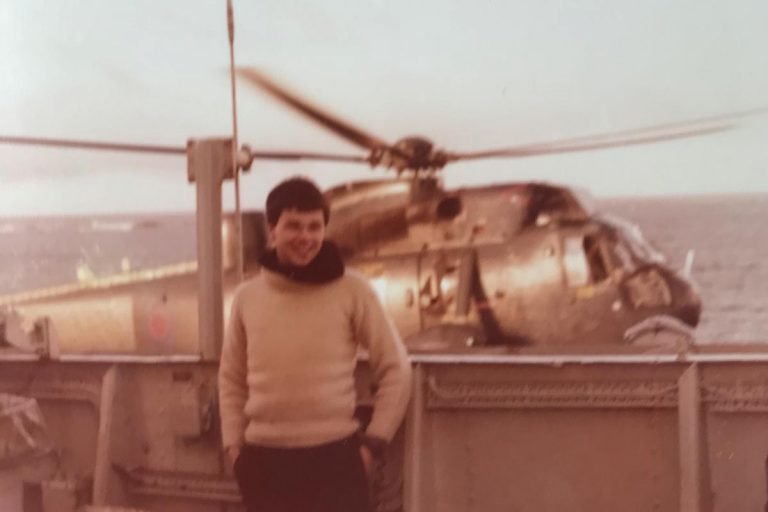 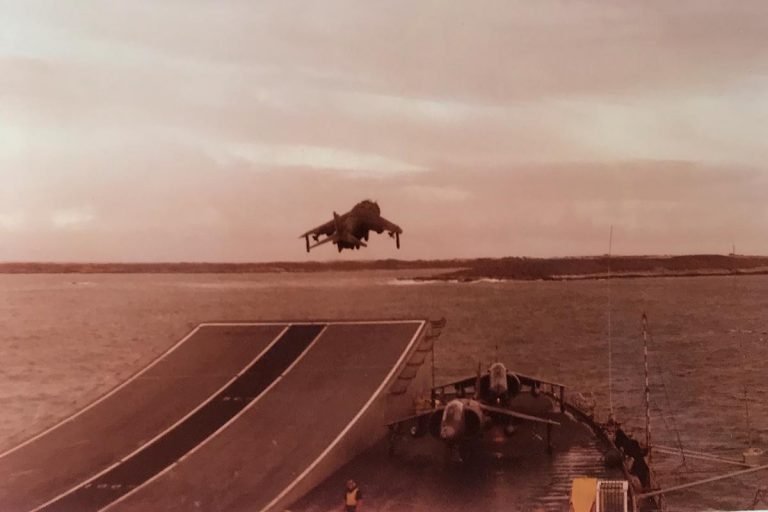 Harrier takes off from HMS Hermes

A young sailor and the dockyards

One of the sailors on board the Hermes in April 1982, as she left Portsmouth, was 17-year-old Andrew Cave. 39 years on, Andrew has been in touch with the Falklands Maritime Heritage Trust to let us know about a campaign he is running to get recognition for the workforces of the dockyards that worked night and day to get the Royal Navy task force ready to sail to the Falklands.

Andrew believes that the dockyards, their workers, and their families, played a massive part in the success of the operation and have waited “far too long” to be honoured for their response to the call to arms.

As a result of Andrew’s efforts, a plaque has already been unveiled at Portsmouth Naval Dockyard (see photograph) and there are now plans for other plaques and ceremonies to follow – as we move towards the 2022 40th anniversary of the war. 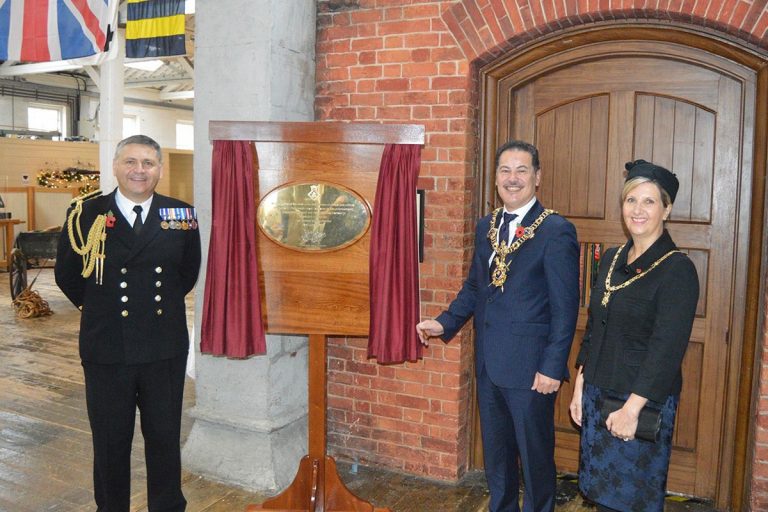 Unveiling of the Falklands Plaque at the Portsmouth Naval Dockyard

“I can remember our Captain Lyn Middleton RN signalling the dockyard thanking them for their magnificent support and this was repeated by other departing ships. I can also remember being told by one of these dockyard workers after the conflict that many of the jobs that were done in order to make sure that everything was ready for the ships to sail on time would normally have taken weeks but had been done around the clock in just days.” 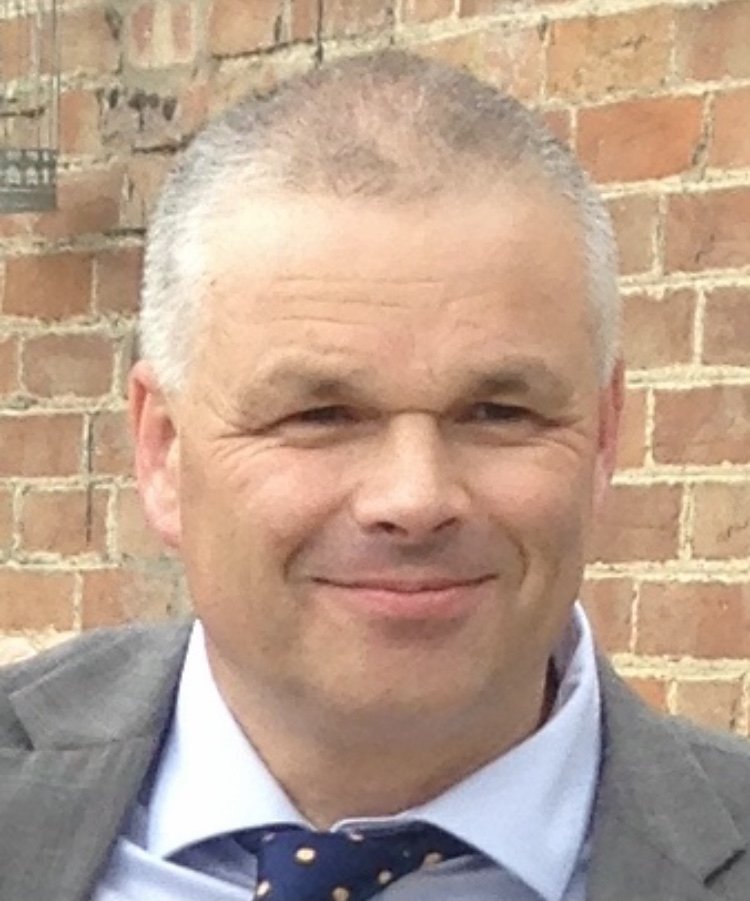 These are the dockyards Andrew has been working with and the progress made:

We have also heard from Clifford Ball, who was the Ministry of Defence Officer in Charge at the RNSTS (Royal Naval Supply and Transport Service) Motor Transport Depot in Portsmouth on April 5th 1982.  This is his recollection of the scramble to get Hermes ready for war.

“Late in the afternoon of Friday 2nd of April, the very day of the Argentinean invasion,” Clifford writes. “ I was summoned to a secret meeting in the Naval Base where, together with a group of others, I was made privy to the fact that the Prime Minister had decided to despatch a Task Force to retake the islands and, what’s more, the aircraft carrier HMS Hermes was to be the flagship.

“Well I can tell you that after the initial euphoria, jaws dropped all around the room when it was further announced that the First Sea Lord, Sir Henry Leach, had decreed that HMS Hermes was under just 72 hours notice to sail – she hadn’t been scheduled to do anything for months ahead and was alongside, partially de-stored and in a state of some disrepair.”

Clifford and his team had special responsibility for one of the most important pieces of the Hermes puzzle – the vital All Wheel Drive (AWD) aircraft towing tractors that moved the carrier’s aircraft to and from the hangar and around the flight deck, and also carried the essential demineralised water, which was injected into the Sea Harriers’ Pegasus engines to improve lift during fully armed V/STOL operations.

“Needless to say when I returned to the depot,” he continues. ”I was met with disbelief when announcing that, ‘no ifs or buts’, all of the tractors had to be in one piece, serviceable and back on board – and all by the following Monday morning!  After their initial shock, the staff were marvellous. Plans were hastily drawn up, weekend arrangements were cancelled, families were notified and round-the-clock work began. Parts were made, mended, cannibalised and, if not actually stolen, were appropriated from every conceivable source. I personally contacted the directors of a number of motor factors in the city. They immediately agreed to stay open for us, morning, noon and night over the whole weekend. If they had it, we got it. No red tape, no documentation, no payment. That was all taken care of later.”

On the morning of 5th April, 1982, Clifford Ball and his team watched with great pride, and more than a sigh of relief, as the last of the tractors was craned aboard at one end of the ship, while the Royal Marine band played for her departure at the other.

The rest, as they say, is history.