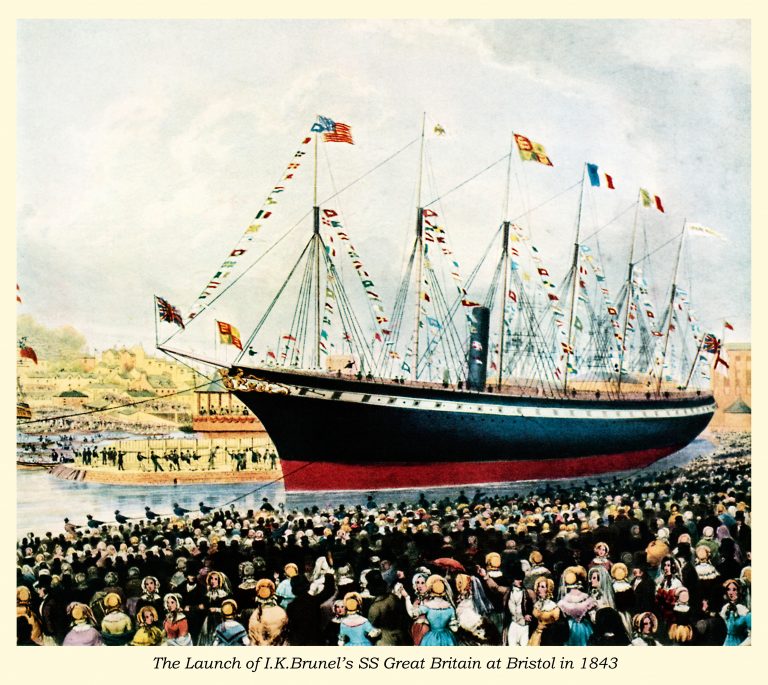 Weighing in at 2,840 tons, Isambard Kingdom Brunel’s iron-hulled, screw-driven ocean-going steamer, SS Great Britain was the pride of the Victorian era and way ahead of its time. By the time it limped into Port Stanley, for repairs, late in the day on 24th May 1886, following an aborted attempt at rounding the Horn, she was already a legend as a Queen of the Ocean.

Launched in Bristol on 19th July 1843, as a passenger steamship, registered in Liverpool, she was part of a ‘grand plan’ by Brunel. He had built the Great Western Railway, running from London to Bristol, and wanted to continue this route by creating a commuter service across the Atlantic to New York. His original vision was to have SS Great Britain reach New York in 13 days and back in 11 days. The press of the day dubbed her “The Greatest Experiment Since the Creation”. Later it would be said that Brunel had created a ship that “changed history”.

But Great Britain made only four return crossings to the Big Apple before she was laid up for a refit and repairs. Only once did she come anywhere near Brunel’s aims and disaster struck on her sixth voyage when she ran aground in Northern Ireland and ended of Brunel’s dream.

She was transformed into an Ocean-going steam sailing ship and for the next 24 years plied between Liverpool and Australia, often carrying emigrants ‘down under’, before she was ‘demoted’ to a sailing cargo vessel, running between Britain and San Francisco. 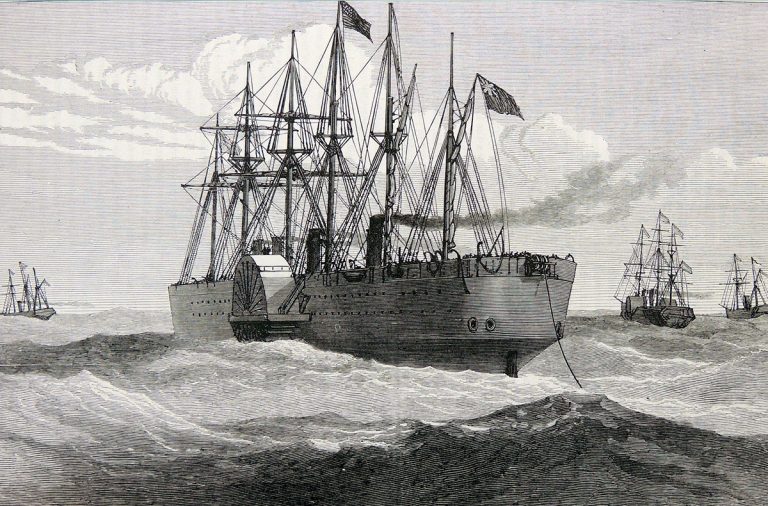 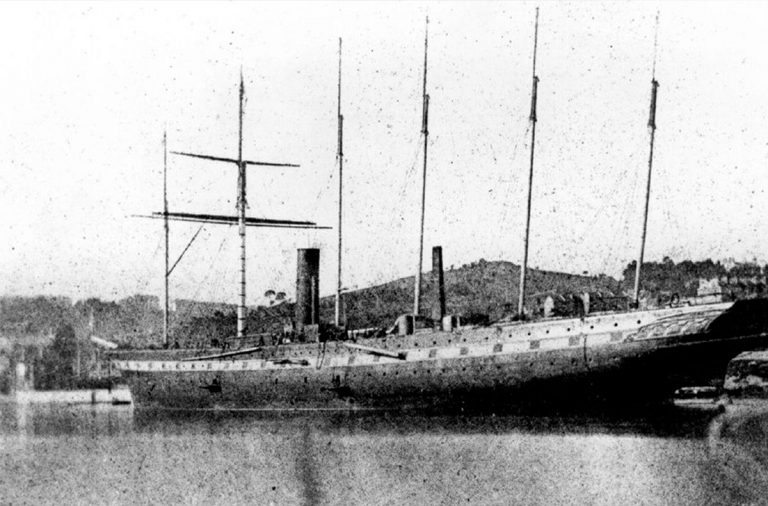 In February 1886, she set out from Penarth docks with a cargo of pure Welsh coal bound for Panama. According to a report made to Britain’s National Maritime Museum by a 1977 Cambridge Expedition to the Falkland Islands, on the morning of the 25th May, she officially registered with the Harbourmaster as needing “repairs to spars”. The report says she had been “severely damaged” during a storm off Cape Horn. Other witnesses said she had been further harmed by a fire on board.

Captaining SS Great Britain at the time was Henry Stapp and his crew are reported to have “begged” him not to take her into Port Stanley. Because of the shortage of wood and metal in the Falklands, the shipping agents in Stanley had a reputation for charging exorbitant prices for repairs which insurers were not prepared to pay. The crew feared they would be stranded in a “God-forsaken island in the middle of the South Atlantic”.

Captain Stapp ignored his crew and, once in port, Great Britain was assessed. It’s recorded that on the 26th May she may have grounded before being assigned an anchorage in the inner harbour. Buy, in any case, her insurers refused to pay for the repairs and she was sold to the Falkland Islands Company, for £3,000, to be used as a storage vessel.

All bar one of her crew and Captain managed to find passage home to Britain. The exception was a young lad by the name of Charlie Enestrom. He liked it so much, he decided to stay, met and married a local girl, had seven children, and became a Falklander. He died in 1940 at the age of 69.

For 51 years SS Great Britain was used to house coal, grain and wool, and briefly found fame again in December 1914, when she refuelled the Royal Navy cruisers that defeated Admiral von Spee at the Battle of the Falklands. Some of her iron is also said to have been used to repair HMS Exeter, one of the cruisers that helped damage the Graf Spee during the Battle of the River Plate in 1939.

According to the 1977 Cambridge report, in 1936, Falkland’s Governor, Henniker Heaton, proposed that the hulk should be restored and preserved, at a cost of “£10,000”. The “citizens” of Bristol were asked to stump up the money. When they didn’t, the project was abandoned and, on 12th April 1937, SS Great Britain was beached in Sparrow Cove, where she remained for another 33 years. 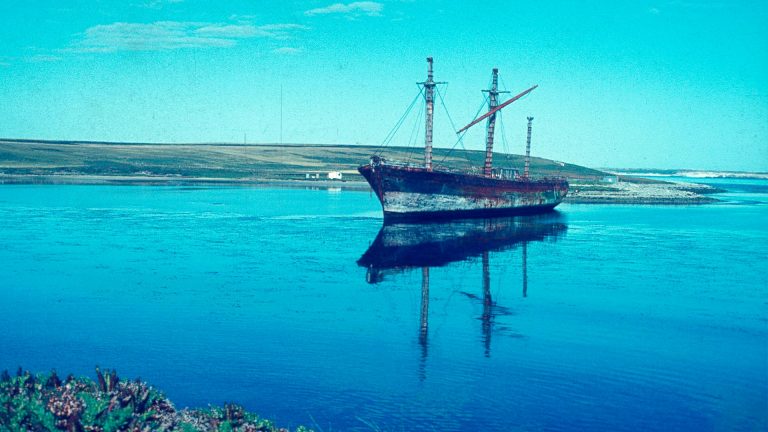 SS Great Britain beached in Sparrow Cove in the Falklands

On 7th April 1970, she was refloated and began an 8,000-mile journey back to Bristol, where she arrived on 19th July 1970, 127 years after she was launched, to be restored to her former glory at a cost of £11.3 million and become the museum ship she is today in the Great Western Dockyard. Brunel’s Great Iron Ship was hailed as “The Grand Old Lady” and pre-Covid, around 150,000 visitors a year toured her decks and cabins. 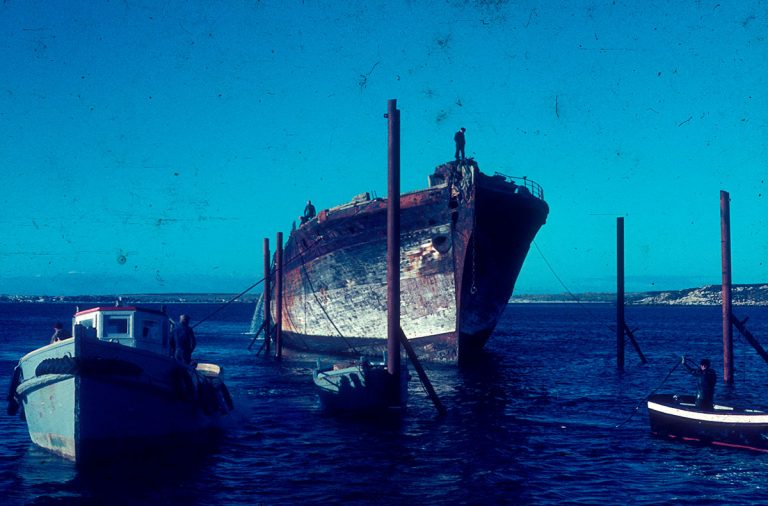 SS Great Britain prepared for her journey to restoration in 1970 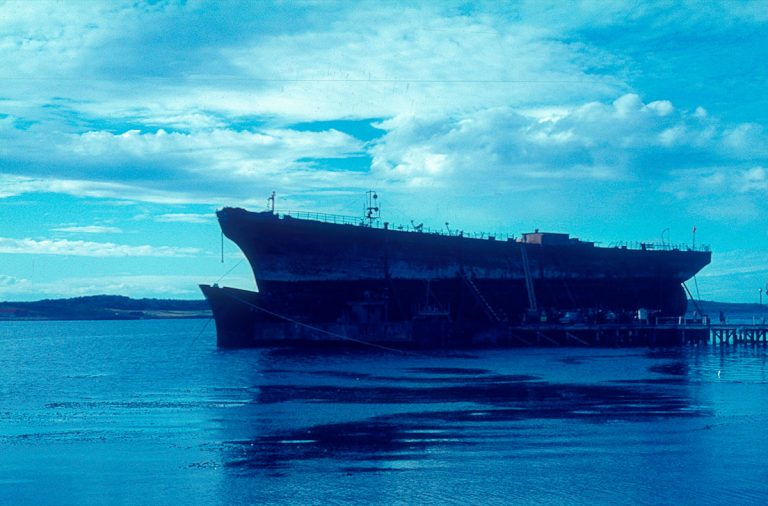 Back in 1977, when the Cambridge Expedition were surveying the wrecks of the Falklands, they reported that remnants from SS Great Britain remained in Stanley at that time: “Her capstan – double gear, deep chested, made by Messrs. Clarke Chapman – is in John Smith’s garden. Part of a mast is displayed in front of the Upland Goose Hotel. Decking of the jetty adjacent to the Charles Cooper in Stanley Harbour is reputed to be from the G.B.” 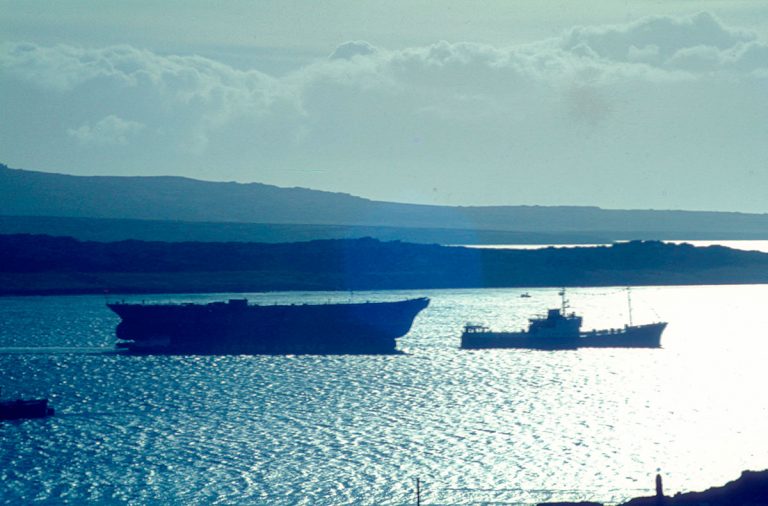 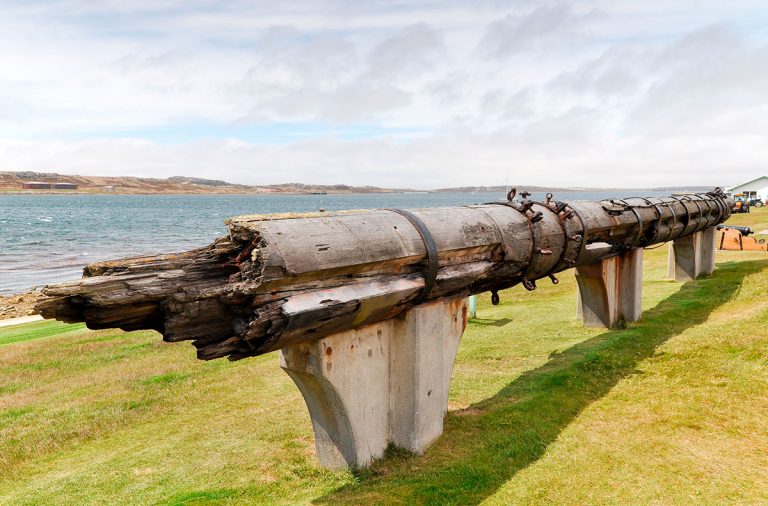