“The Battles of Coronel and Falkland Islands" BFI Silent Movie

Lost Ships: The Hunt for the Kaiser’s Superfleet isn’t the only film about the British naval victory off the Falklands and the previous defeat at Coronel, off the coast of Chile, a month earlier, on 1st November 1914.

In 1926, just 12 years after it all happened, the British film industry produced an epic silent movie about the event, which was put out on general release in Britain in 1927.  It was called The Battles of Coronel and Falkland Islands and ran for 102 minutes in monochrome and revealed how the shock of the German successes at Coronel led to an act of naval revenge which resulted in the death of Vice-Admiral von Spee in the Falklands and the loss of his flagship, SMS Scharnhorst, and her sister-ship, SMS Gneisenau and two other German cruisers.

It was directed by Walter Summers, a highly-decorated veteran of the trenches of the Somme, and the script was written by John Buchan, who had become famous for his 1915 novel, The 39 Steps (which was also later turned into a hit film).

Walter Summers directed 33 films during his career, including Ypres (1925) Nelson (1926), Chamber of Horrors (1929) and The Return of Bulldog Drummond (1934), which starred Ralph Richardson. 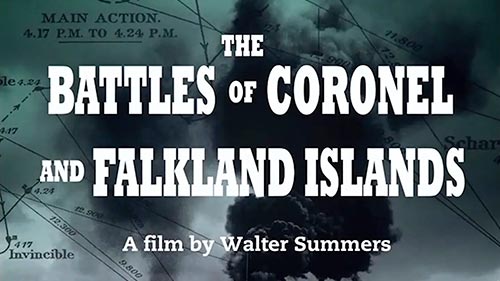 The Summers-Buchan movie cost £18,000 – which equates to more than £1 million in today’s money.  Costs were kept down, in part, by the Royal Navy “lending” its entire Mediterranean fleet to help with the battle reenactment scenes.  No filming was done in the Falklands – Malta and the Scilly Isles in the UK were used instead.  But, the result was considered to be a black-and-white epic.

After its general release, with no television to give it a second “life”, the film lay largely forgotten in a British Film Institute vault, before a BFI film archivist, Bryony Dixon, persuaded her bosses to fund its restoration, to mark the 100th anniversary of the great battle in 2014. Excerpts of the restored film have been used in the Trust’s documentary about the battles and we are grateful to the BFI for that. 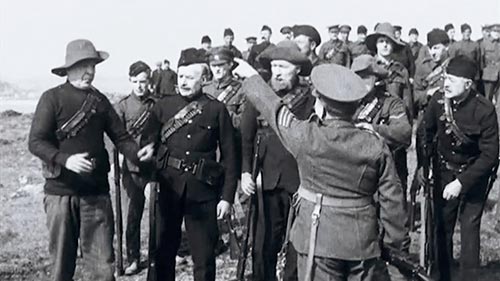 Did they know they were doomed?

As can be seen in video extracts from the documentary, available here, ‘The Battles of Coronel and Falkland Islands’ offers an even-handed account of the battles, portraying German as well as British officers.

At the supper celebrating their victory at Coronel, Von Spee is invited to toast “damnation to the enemy”, but refuses, saying he prefers instead to “raise my glass in honour of a gallant enemy”.
Later, on receiving a bouquet of flowers, he muses that “they may serve for my funeral when the time comes”.
The silent movie also tackles the unhappiness and despair of the doomed British admiral, “Kit” Cradock, as he spent his last days in Stanley before setting out with his ‘rag-tag’ Royal Navy task force to take-on von Spee’s far more powerful East Asiatic Squadron.

Cradock’s requests to the Admiralty in London for bigger and better ships had been refused and, famously, he buried his service medals in the ground of Government House and left letters with the Falklands Governor to be sent to England when it was confirmed that he was dead..

“I dined on the flagship that night and said my goodbyes to Captain Franklin and other friends.  Cradock told me that he knew he would not return from this expedition.”

Two Royal Navy armoured cruisers were destroyed, including Cradock’s flagship, HMS Good Hope, with the loss of more than 1,600 men, including the Admiral.  Only a light cruiser, HMS Glasgow, managed to escape.  It was the Royal Navy’s first defeat at sea in more than 100 years.

The video extracts on this page come from the Trust’s TV documentary Lost Ships: The Hunt for the Kaiser’s Superfleet.